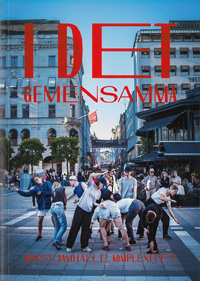 Book of the month

Public art encompasses all forms of contemporary art that is shown in public spaces or addresses the idea of the public. Contemporary art does not only consist of objects, but operates on relational and conceptual levels as well. Similarly, public spaces are not only streets and squares, but to an equal degree, the social and mental spaces that form when we exchange ideas and reflect critically. This web of complex, dynamic situations is Public Art Agency Sweden’s natural arena.

We have a long tradition of collaborating closely with artists to produce new works. At the centre of our organisation, artists and curators freely investigate the relationship of art to public space. Their work generates knowledge and methods that can in turn be applied in different social contexts such as urban development projects, where the artist’s task is often to contribute specific social or creative skills rather than to create a singular artwork.

A democratic ambition is at the foundation of Public Art Agency Sweden’s mission, a belief that art has an important role to play in society and should be accessible to everyone. To be able to show contemporary art in places where people work, gather and go about their daily lives is both a fantastic opportunity and a profound privilege. Our work with government agencies and institutions also brings us into such diverse environments as youth detention centres, prisons, schools and embassies.

Public Art Agency Sweden was founded in 1937 as a government agency within the Ministry of Culture. Amongst the projects we have produced during our soon 80 years of existence are important artistic comments on the development of Swedish society. The organisation was founded at a time when the Swedish welfare state was in a phase of rapid change and growth. Today, we are in another phase of intense change and there is a great need to find new ways to formulate the idea of the public.

Our mission has necessarily evolved over time – in pace with societal changes and the significant changes that have taken place in contemporary art. In 2012 we began moving from working with permanent artworks and a large collection in government buildings to also exploring free formats, urban development projects and not least of all, discussions and research that is focused on new forms of public art practices.